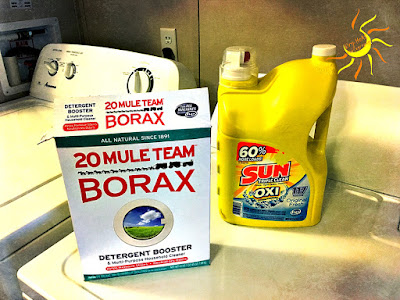 Sometimes old is better. I mean, if it ain't broke, don't fix it. Right?

Borax is an all natural product that is relatively safe to use in the home as long as you don't rub it in your eyes or eat it.

It's best use, in my opinion, is as a color safe bleach in the laundry. Borax boosts the cleaning power of any detergent, naturally softens hard water, and gets those lingering nasty odors out of clothes. Just add about 1/4 cup to a large load of laundry and you're good to go.

You know how after awhile your gym clothes will stink as soon as you put them on no matter how may times they've been washed or how strongly scented the detergent is? Yeah, that kind of stench. It also works on lingering ammonia build up in baby clothes.

According to the 20MuleTeam website, Borax can also be used as a non-scratching surface cleaner in the kitchen and bathroom, though I would recommend wearing gloves for that application as it's alkaline pH can be a skin irritant (as can baking soda).

Some things that you're not paying for with Borax is fancy packing and expensive advertising campaigns. Because of this, Borax usually costs quite a bit less than everything else on the laundry and cleaning supply isle, especially the products touted as "all natural" and "non-toxic".

Simplify your shopping list with one product that is safe to use, effective for many cleaning purposes, and inexpensive to boot!

1. What happened? 2. What does it mean? 3. How will you respond? Before deciding what something means remember this: Other people's ...